a
1
2
3
4
5
6
6
7
8
9
A
B
IMPORTANTTo read the national and local advice about coronavirus
CLICK HERE
CLOSE
Contact
Open Hours
book appointments
Vaccines
Destinations
General
Need some help?
Email Us
Ambulance
999
NHS
111
Online Shopping
0300 303 3380
Pharmacy
Carter Chemist and Consulting Rooms
01923 825753
Social
Facebook
* Please be advised that we record all incoming and outgoing calls. This is for training and quality purposes and to protect both our staff and patients
Usual
Opening Hours
Monday
09:00 to 19:00
Tuesday
09:00 to 19:00
Wednesday
09:00 to 19:00
Thursday
09:00 to 19:00
Friday
09:00 to 19:00
Saturday
09:00 to 13:00
Sunday
Closed
Holiday
Opening Hours
Our opening hours may vary from branch to branch. Visit our branches page to see the opening hours of your nearest branch.
See Branches
Cholera
Diphtheria
Hepatitis A
Hepatitus B
Japanese Encephalitis
Meningitis A,C,W, and Y
Polio
Rabies
Tetanus
Tick-borne Encephalitis
Typhoid
Yellow Fever
Africa
Antarctica
Asia
Australia & Pacific
Caribbean
Central America
Europe
Middle East
North America
South America
BLOG
What we have to say about your health and well being
Search...
ADDICTIONS
Why does the unconscious mind find use for addictions?
21
Feb 2020
Why does the unconscious mind find use for addictions?
Addictions are psychological or physiological impulses that keep us tied to a certain substance or behaviour, even when our compulsions become destructive. Commonly associated with drugs, alcohol, and nicotine, addictions can also manifest themselves in our attitudes towards work, infidelity, and gambling. Almost anything can become addictive if our unconscious mind finds a purpose for it.

A lot of addictions develop as a way of coping with unwanted feelings or thoughts. This distracts us from an unhappy past or present and can create a powerful unconscious dependency that will lead us to want more. We may feel we have a short-cut to feeling good or coping, but protracted use of any substance or behaviour that circumvents the underlying causes will always lead to deeper suffering somewhere down the line.

How context can drive addictive behaviour

There is a fascinating case study of addiction involving US servicemen during the Vietnam War, 19% of which had developed a heroin addiction. After the war, Nixon’s government was anxious as to how to accept these brave but damaged men back into society; wouldn’t they end up as criminals feeding their addictions? He needn't have worried. 95% of the soldiers immediately stopped once they returned to their families. The 5% who remained addicted had less or no family support and no life to go back to. Once the context of war had been removed, most men went back to a life free of addiction, as if they could psychologically sidestep the physical dependency.

How addictions can affect you

While there is evidence to suggest that addiction is genetic, usually environmental factors play a large role, such as being in peer-group of other addicts. However, the effort it takes to maintain an addiction can, in the long run, become just as exhausting as facing up to the need to recover. Admitting you have a problem is recognised as the first big step toward recovery.
You may need help if;


Experiencing the following withdrawal symptoms suggests you may need medical assistance before quitting for good;

Sometimes what a person thinks of as a physical addiction is usually a psychological habit that the unconscious mind is not ready to let go of, as addicts need to use some substance or behaviour to help them cope. Often people suffering from addiction of any kind create logical loopholes around their guilt to maintain their habits. Because addiction is a symptom of the unconscious mind trying to deal with a problem, people find that they are very reluctant to let go, automatically finding excuses to continue, even though on a conscious level they know it’s killing them!

It’s not uncommon to hear;

"I'm so stressed; I need to smoke"

"My father was addicted and I'm addicted... it runs in the family"

"The thing is I have an addictive personality"

"This just hasn't worked for me"

"I like a drink! So what? I'm not harming anyone!"

And most tragically of all;

"I'm not addicted! I can quit whenever I like!"

Seeking help for the psychological underpinning of a problem is essential to successful recovery, because as long as there is a need to escape, there will always be a need for the addiction. 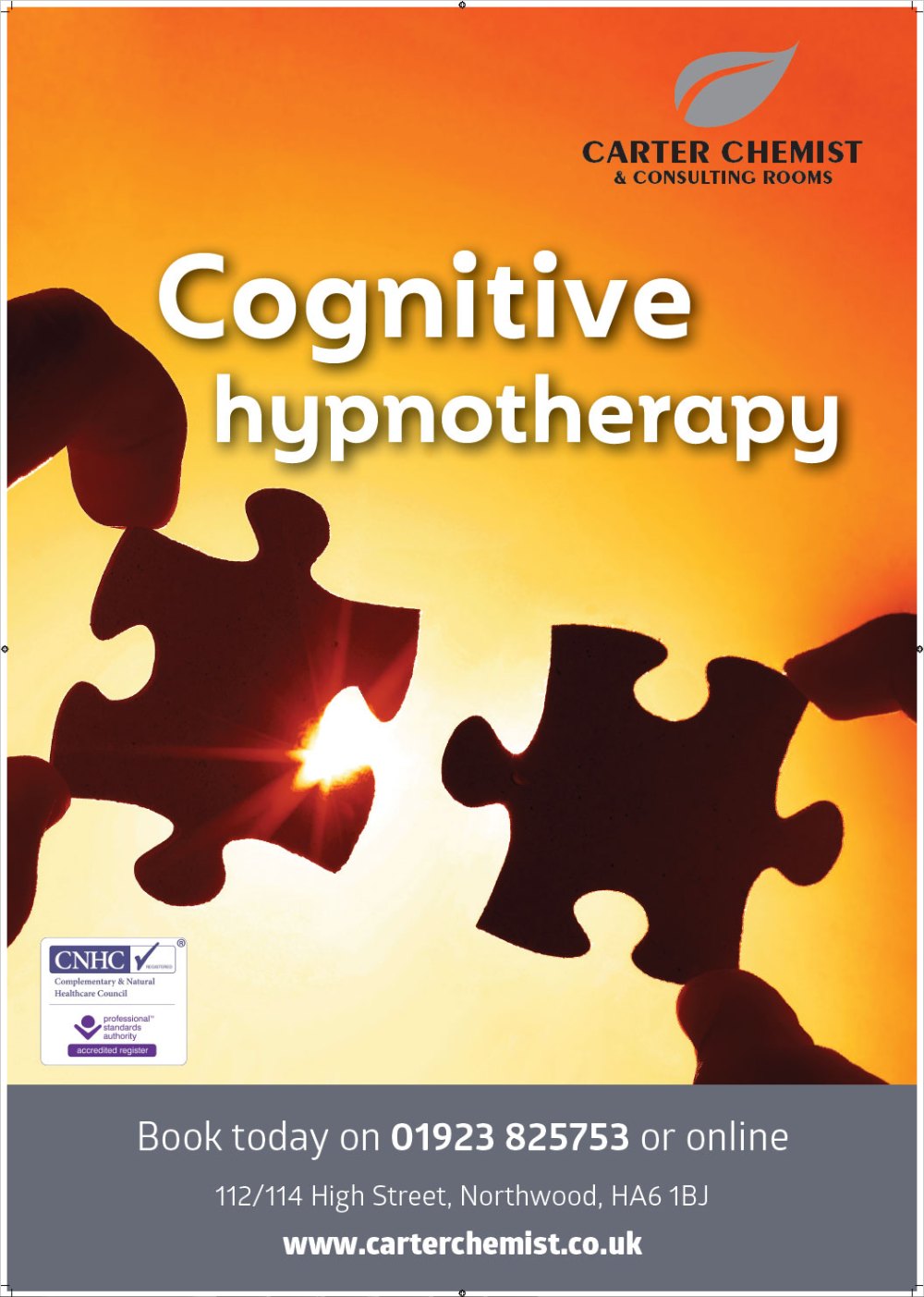 CONTACT
112-114 High Street, Middlesex
Northwood
Greater London
HA6 1BJ
Contact Us
01923 825753
INFORMATION
Company Registration:
05371655
Premises GPhC Number:
1035057
Superintendent:
Mr Hatul Shah
OPENING HOURS
BRANCHES
See All Branches
Cookie Policy
Privacy Policy
Terms And Conditions
Local Shopping Policy
Copyright 2021
Powered by www.thepharmacycentre.com
and www.medicinechest.co.uk
We were unable to connect you to our system.
Please click to try again.
If this problem persists contact info@thepharmacycentre.com
This website is no longer available, If you are the pharmacy owner, please contact The Pharmacy Centre to re-activate.
Don't show this again
Don't show this again
MENU
Main Menu
No Results
Shopping Categories
More Categories
In Store Shopping
More Products
Online Shopping
More Online Products
Health
Search Health Articles...
Search Medicines...
Coronavirus Advice
Admin Tools
Settings
Volume
Text
Device
Your Basket
In Store
Total
Checkout
Online
Total Excl VAT
VAT
Total
Checkout
Live Chat
Live chat is currently disabled. Toggle the switch to make yourself available for live chat.
Active
Pending
Type your message and press enter to send, An administrator will reply to you shortly
Chat...
Send
End Conversation
Back to Chats
Please select a branch to view orders, patients and history...
Website
Select Branch
Order In
Patient Orders
Pending Orders
Complete Orders
Order History
Patients
Register Reminders
Statistics
Configure
Log Out
Speciify which content you wish to enable on your site
Flu Pages & Content
Medic Spot Covid Test Pages & Content
Medic Spot Travel Planner
Online Doctor Pages & Content
Testimonials Pages & Content
Travel Clinic Pages & Content
Back
Next
What do you want to do?
Visit the website home page
Visit the website page for my pharmacy
Change my pharmacy
Back
Next
1
2
3
4
5
6
7
8
9
10
11
12
13
14
15
16
17
18
19
20
21
22
23
24
25
26
27
28
29
30
31
Back
Next
Please provide your email address you use to login to your account, we will then send you a password reset code.
Email
Back
Next
Back
Next
The following list shows all the items you have placed orders for, click on an item to see all the dates you have placed an order for the item.
Back
Next
Please provide a little more information to finish setting up your account...
Which of our stores you use
Are you registered for GP online services?
The surgery you are registered with
Are you exempt from prescription charges?
A contact telephone number
Your home address
Messages
No new messages
Your surgery does not currently allow you to place orders via GP online services. Please contact your surgery to resolve this or click here to unlink.
Online prescription ordering is not currently enabled for your branch. You can still store your items and set reminders to re-order.
You haven't set up any reminders to reorder your prescription items. Click here to setup reminders now
Your recent prescription orders
What do you want to do?
Change User
Order
Manage
Pharmacy
History
Purchases
Log Out
Please enter your login details to access your account...
Email
Password
Keep me logged in
Help! I have forgotten my password
Back
Next
To keep your password secure you will periodically need to change it. Please provide a new password to login to your account.
Email
New Password
Back
Next
If you have an NHS account you can use it to login to your account. By doing so we can automatically collect information required to connect to your GP online.

You will need to give NHS login consent to share your information with us for the purposes of creating your account with us, ordering repeat prescriptions, sending your GP a message and seeing the health information your GP shares with you